After 1 day in Guadeloupe, we left for Antigua. That’s only about 50nm. We arrived in the afternoon and went to English harbour first. But man it was crowded over there! No way we could find a good anchorage there! So we left to sail around the corner to Falmouth bay. A huge bay with plenty of space. You have to follow all the signs and routes to find your way around the bay and to find the right place to anchor, but there is space enough. Antigua here we come! Our first go was immigration. When going to the dinghy dock you pass by all the huge mega yachts. My oh my … incredible. J class boats, mega motorboats, pirate ships you name it! It’s there! I have never seen so many mega yachts together at the same place. in between all these big ships there even is a great dinghy dock!

The immigration office is in English harbour which is only 10 minutes walking. Clearance was easy. We had to fill in the Sailclear system and show them the usual papers, pay, and that was it. According to Noonsite, you need a cruising permit but it’s only now (6 months later) that I hear about that! We did not have a cruising and nobody checked. On our way back we walked around picturesque English harbour. A natural harbour and settlement in the extreme south of the island. English Harbour is best known for Nelson’s Dockyard, a former British Navy base; it displays restored 18th and 19th-century buildings and other historical artefacts from the colonial period of the dockyard, especially the time it was commanded by Horatio Nelson. It is part of Nelson’s Dockyard National Park, which also contains Clarence House and Shirley Heights, and is a UNESCO World Heritage Site. Nelson’s Dockyard is also home to some of Antigua’s sailing and yachting events such as Antigua Sailing Week. There is a lot of interesting info to find on the Unesco website. This film, made by Caribbean Journal,  gives a good impression of  Nelson’s dockyard.

Falmouth Harbour with English Harbour right next to it has a great selection of cafes to pick from. Pleasant service, wonderful harbour views and good quality. The Antigua Yacht Club Marina is a good meeting point to meet friends and other sailors.  Located on the boardwalk this cafe has been part of the Antigua scene for two decades now. It is a favourite haunt of the locals and visiting leisure sailors who come for breakfast, a great coffee menu and some fresh-baked pastries and treats such as chocolate muffins, croissants and fruit tarts. A wonderful gelateria is also part of the set-up here so you can round off your coffee break with an in-house produced ice-cream. There are many cafe and restaurants in this part of the harbour and its a bubbling place to have sundowners and meet other sailors. Also, there is a supermarket. You can go there with the dinghy to provide food and alcohol.
On the south side of the bay, you find the Catamaran Marina. There is boatyard as well. Our friend Frenck who was the Captain of a big 64-foot X-yacht was working on the boat over there. We walked all the wayaround the bay to visit him. Once you are going left at the main street you see the other side of the island … very poor. Houses molested by Irma and never be rebuilt. Drunks walking around etc. We find this is a general view on all the Caribbean islands. In the ‘big’ cities things are sort of organised but once you set one foot out of that area there is a lot of poverty ….

We really had a good time in English Harbour and Falmouth bay. We met old and new friends and had lots of fun! Angela, Frenck, the crazy girlfriends of Corinne from Harken Inc. Cori and Dale of SV Highflite, Debby and Gary of Jack the Sailingdog! The famous insta dog! We had sunshine, wind and rain. It has been fabulous but now it is time to move on. St. Martin is calling ….

Our next destination was Jolly Harbour. Jolly Harbour is built on the dream of Swiss businessman Dr Alfred Erhart back in the late ’80s early ’90s.  Erhart developed a magnificent resort which includes over 650 privately owned properties of which the majority are waterfront. Today, there are many two- and three-bedroom villas available to rent. The marina and boatyard, which became operational in 1992, is a full-service facility offering dockage and storage. The complex used to have a diverse mix of restaurants, bars and cafés; a well-stocked international-style supermarket; hair salons; bank facilities; car rentals and taxis; Olympic-size swimming pool; tennis courts; gym and an 18-hole golf course. In essence, Jolly Harbour Marina Village is like a small independent town where you can get virtually everything you need on-site, including world-class white sandy beaches. Over the past 24 years, Jolly Harbour Marina has changed hands and management several times. At the time we were in the “village” there was not much left of the charm which the village is described by in the ’90s. It all looked like it’s hard to maintain the beauty of the past. To us, it looked messy and all the houses have a different look. But I do believe that in the beginning, it must have been an absolutely stunning place. The idea of the inland waters between the houses is brilliant. But it looks deserted now. Overloaded trash bins, cheap outlook, the premises not well maintained etc. There is a good dinghy dock close the supermarket though.  A superb supermarket where you can buy everything you have probably not seen for a long time! Like liquorice…!  But expensive as well. We anchored outside in the bay for 1 day and the next day we decided to sail around the corner to anchor in the bay where you see the exquisite Hermitage hotel. What a pleasure. So peaceful and quiet. We loved it! We stayed here for 5 days just hanging around and enjoying the beauty! We hiked to Pearn’s Point, went to the blowholes, swam around, walked the beach. We had a great time. Should have stayed longer but St. Martin was calling!

What do you know about the Back Pineapple?
Antiguans are very proud of their black pineapple. The signature fruit of Antigua, the Antigua Black pineapple, is known world-round as the sweetest and rarest variety there is. Don’t let the name fool you, these pineapples are as perfectly golden as anyone you’ve seen before, if not more so. 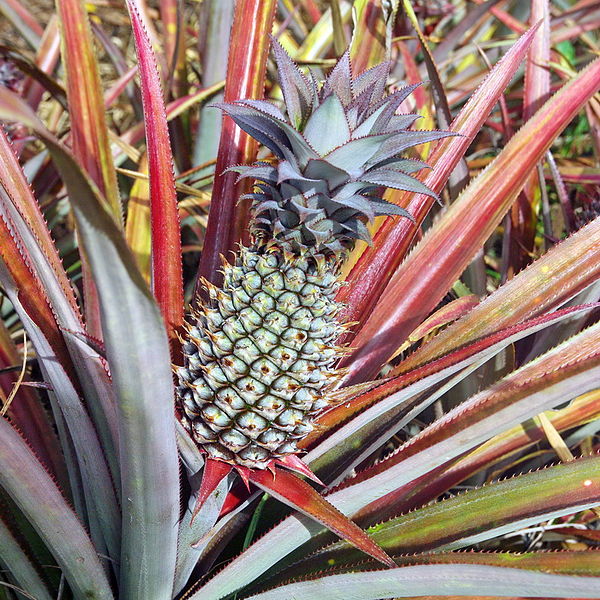 The difference comes where it counts: on the inside. The Antigua Black is said to have a much higher sugar content and lower acidity than more common varieties of pineapple. This combination means the fruit is especially pleasing to the palate, a taste described by those who have tried it as unlike any other they’ve had before. Be careful biting into an Antigua Black: you may not be able to enjoy another variety of pineapple again. These pineapples are raised for quality, not quantity, making their unmatched sweetness a true treat to uncover among Caribbean fruits. Local farmers take advantage of Antigua’s rich soil, moderate rain, and nearly endless sunshine to raise up these paragons of pineapple perfection. No artificial ingredients here: just the fruits of the bountiful land. With the nation’s name as its own, the Antigua Black is a point of pride for the entire country. It even stands atop the Antiguan coat of arms, a fitting tribute to a delight found nowhere else on the planet. If any other country grew a pineapple this good, you can imagine they’d want to advertise it just as well. While for many years they were grown only by small, independent farmers, in the mid 20th century the Antiguan government established agricultural lands dedicated solely to cultivating these amazing fruits. Although there are now 20 acres teeming with pineapple perfection, the Antigua Black is still a precious commodity, and only those who make their way to this tropical paradise are able to sample its splendour. Antigua Black Pineapples can’t be found at supermarkets stateside. In fact, they rarely leave the island. Their ripeness is delicate as an Antiguan hibiscus flower, so much so that the fruits can’t be transported out or grown in other conditions lest they spoil. Just as the beaches have to be seen to be believed, it takes a trip down to Antigua to taste the best pineapple the world has to offer.You can find them in Antigua’s finest bars and restaurants, but many say the best Antigua Blacks are to be found on one of the many roadsides stands along the nation’s dusty side roads. Pullover and take a bite into one of the Caribbean’s finest food traditions, you won’t regret it!

Antigua (pronounced An-tee’ga) is located in the heart of the Caribbean Sea at 17 degrees 5’ north and longitude 61 degrees 45’. The largest of the Leeward Islands, Antigua is a 108-square mile limestone and coral island recognized for its numerous coves, bays, 365 white sand beaches and clear turquoise-coloured waters. 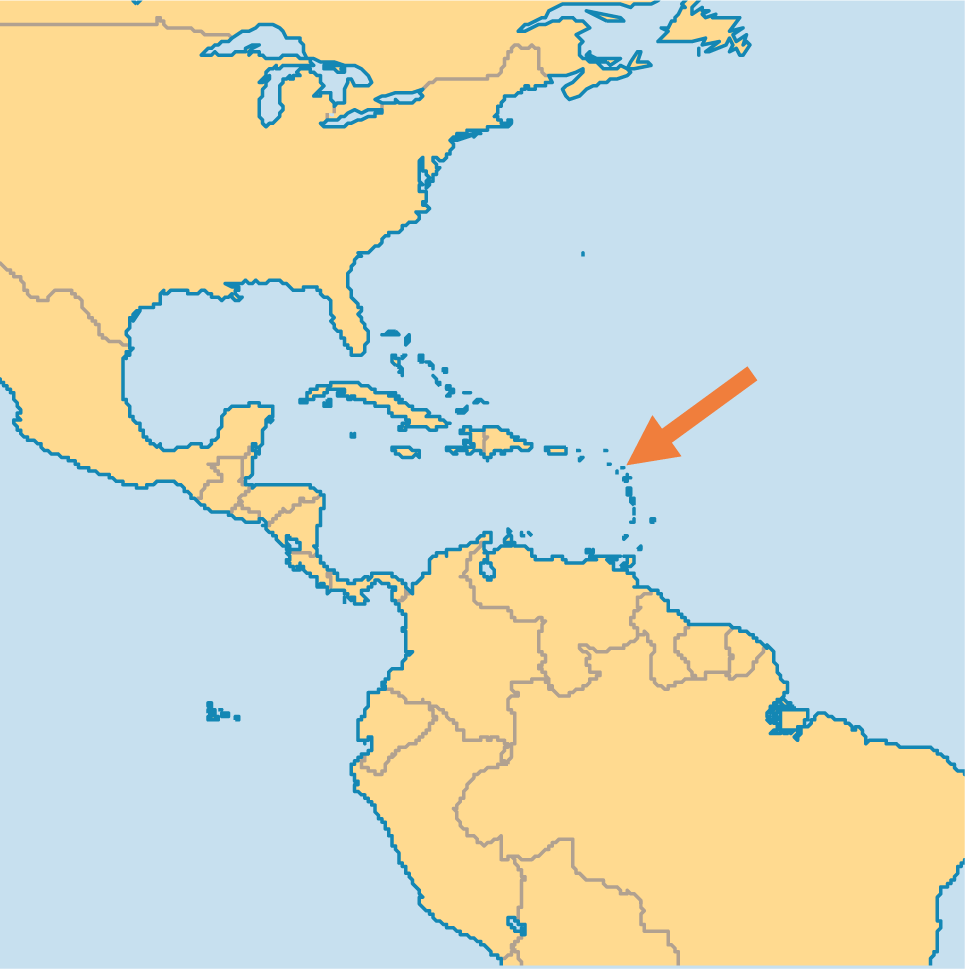 To the south are the islands of Montserrat and Guadeloupe, and to the north and west are Nevis, St. Kitts, St. Barts and St. Martin/Maarten. The sister island of Barbuda (Bar-byew’ da) lies 27 miles northeast of Antigua with a land area of 62 square miles. The capital of Antigua is St. John’s with two distinctive waterfront areas and a selection of shops and restaurants. Sunny and warm all year with soothing trade winds, the average temperature ranges from the mid-seventies in the winter to the mid-eighties in the summer. Annual rainfall averages only 45 inches, making it the sunniest of the eastern Caribbean islands, and the northeast trade winds are nearly constant, flagging only in September. English is the spoken language.

A majority of the 80,100 people (2004 Census) residing on Antigua are of African descent, the remainder being of British, Lebanese, Syrian, Chinese and Portuguese origin.

Antigua island history
Christopher Columbus named Antigua in 1493 in homage to Santa
Maria de la Antigua, the miracle-working saint of Seville, Spain. In 1632, the British permanently settled Antigua as a colony. The arrival of Sir Christopher Codrington began the sugar era for the island with more than 150 cane-processing windmills—each the focal point of a sizeable plantation. By the end of the eighteenth century, Antigua had become an important strategic port as well as a valuable commercial colony. Known as the “gateway to the Caribbean,” it was situated in a position that offered control over the major sailing routes to and from the regions rich island colonies. Most of the island’s historical sites, from its many-ruined fortification to the impeccably restored architecture of English Harbourtown, are reminders of colonial efforts to ensure its safety from invasion. Horatio Nelson arrived in 1784 to develop the British naval facilities at English Harbour and to enforce stringent commercial shipping laws. The first of these two tasks resulted in the construction of Nelson’s Dockyard, one of Antigua’s finest physical assets. Serving under Nelson at the time was the future King William IV, for whom the more pleasant accommodation of Clarence House was built. It was during William’s reign, in 1834, that Britain abolished slavery in the empire. As the sugar industry of the British islands began to dissolve, the island turned towards the development of tourism. In 1967, under the leadership of V.C. Bird, with Barbuda and the tiny island of Redonda as dependencies, Antigua became an associated state of the Commonwealth, and in 1981 it achieved full independent status.