EXPLANATION OF THE REGION INCLUDING THE ISLANDS

Previous Next
THE CARIBBEAN REGION

It can be very confusing when hearing all sort of different terminologies used for the Caribbean region! Time to sort out and make it a bit easier to understand!

The term Antilles dates traditionally from before Europeans reached the New World when Antilia referred to semi-mythical lands located somewhere west of Europe across the Atlantic. On medieval charts, it was sometimes indicated as a continent or large island and sometimes as an archipelago. After ‘discovery’ of the West Indies by Christopher Columbus, the Spanish term Antillas was commonly assigned to the new lands, and “Sea of the Antilles” in various European languages is used as an alternate designation for the Caribbean Sea. 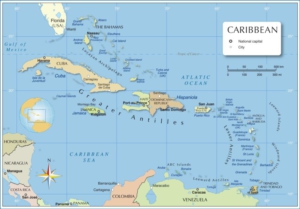 The Caribbean islands are made up of sovereign states, overseas dependencies and overseas departments. The Caribbean was named after the people who inhabited the islands prior to European arrival – The Caribs. Once the Spanish arrived the population of the Caribs began to decrease. Today the islands in the Caribbean are owned by several countries including the UK, the United States, France and The Netherlands.

THE ISLANDS WITHIN THE REGIONS:
The Lucayan Archipelago
The Commonwealth of The Bahamas and the British Overseas Territory of the Turks and Caicos Islands.

The Greater Antilles
Cuba, Jamaica, Puerto Rico, Haiti and Dominican Republic (together are called Hispaniola), and the Cayman Islands.

The Lesser Antilles includes the islands of the USVI’s to Grenada.

The name of the Leeward and Windward island groups dates from previous centuries when sailing ships were the sole form of transportation across the Atlantic Ocean. In sailing terminology, “windward” means towards the source of the wind, while “leeward” is the opposite direction. In the West Indies, the prevailing winds, known as the trade winds, blow out of the northeast. Therefore, an island to the northwest, such as Puerto Rico, would typically be leeward of an island to the southeast, such as Antigua, and conversely, Antigua would typically be windward of Puerto Rico, but leeward of Guadeloupe and Martinique.

There is something strange in languages and the interpretation of words! In modern usage in languages other than English, notably, Spanish, French and Dutch, all of the Lesser Antilles from the Virgin Islands to Trinidad and Tobago are known as the Windward Islands (Îles du Vent in French, Bovenwindse Eilanden in Dutch and Islas de Barlovento in Spanish). The islands along the Venezuelan coast, known in English as the Leeward Antilles, in languages other than English are known as the Leeward Islands.

Though the islands of Trinidad and Tobago geologically are an extension of the South American mainland, they are often considered to constitute the southern end of the Windward group. Similarly, Barbados (east of Saint Vincent and the Grenadines) is not physiographically part of the chain but is usually grouped with the Windward Islands. Dominica was formerly administered by the British government as part of the Leeward Islands, rather than the Windwards.

From west to east: