We left The Grenadines via Bequia, St. Lucia and Martinique to end up in Dominica. Officially the Commonwealth of Dominica. When we arrived in Prince Ruperts Bay we were immediately approached by a local boat. These guys offer you excursions or whatever you need in fact. A very friendly guy named Titus, and we booked our River tour with him for the next day.

Later that day we were visited by one of the guys of P.A.Y.S. The Portsmouth Association of Yacht Services based in Portsmouth.  This group is made up of trained certified guides and local businesses that also patrol Prince Rupert Bay 24/7 during the winter sailing season (November to the end of May). They “help yachties” with numerous services and monitor VHF Ch.16 to assist on arrival. Both Portsmouth and Roseau provide on-the-water security patrols. The Dominica Marine Association and the Dominica Marine Center has been providing security in the Roseau bay area and is happy to report a 99% perfect record over the 10 years of providing such security. We have not seen any patrols on the water at all in Prince Ruperts Bay …. So we were curious about what was going on. We talked to the P.A.Y.S. guy for a long time and the guy was complaining about the guy who visited us that morning. Who is not a member of P.A.Y.S. We were confused by then. So we went to the office of P.A.Y.S to find out what was going on. To keep it short, it looks like it’s not organised at all. The money which is collected from the moorings and their weekly BBQ  is not going to the benefit of the people or the organisation at all.  But to some people higher in the organisation, I am afraid. Also one of the reasons why Titus is not a member. He is living on the beach and each boat who comes in he is the first to visit. So very willing to work! Long story short, we did the River Tour with Titus, the guy who is not a member of the P.A.Y.S. He knew sooo much about history, flora and fauna and all sorts of anecdotes! What a pleasure! we certainly recommend him to guide you! During the tour, Titus will tell you about history and plants and animals and of course, he will show you the small house as filmset of the Pirates in the Caribbean movie!

There are many other things to do on the island. It is the youngest island in the Lesser Antilles, and in fact, it is still being formed by geothermal-volcanic activity, as evidenced by the world’s second-largest hot spring, called Boiling Lake. It’s actually so hot that you can boil eggs in the hot water! This video, made by Largeup (https://www.youtube.com/channel/UC_k3BRoDOosVANkGzgPOW5g) It shows you the way to go when you want to see the boiling Lake. Quite a hike!

And there are many other things to do. Dolhin- and whale watching, hiking, visit the many waterfalls, go to the beach, visit the botanical gardens, snorkelling and diving, visit the Fort in Cabrits National Park, visit the cultural village by the sea and many more!

The capital, Roseau, is located on the western side of the island. It is geographically situated as part of the Windward Islands chain in the Lesser Antilles archipelago in the Caribbean Sea. The island is located near Guadeloupe to the northwest and Martinique to the south-southeast. Its area is 750 km2(290 sq mi), and the highest point is Morne Diablotins, at 1,447 m (4,747 ft) in elevation. The population was 71,293 at the 2011 census.
The island was settled by the Arawak arriving from South America in the 5th century. The Island Caribs or Kalinagos displaced the Arawak by the 15th century. Columbus is said to have passed the island on Sunday 3 November 1493 and therefore called the Island Sunday Island. It was later colonised by Europeans, predominantly by the French from the 1690s to 1763. Great Britain took possession in 1763 after the Seven Years’ War, and it gradually established English as its official language. The island gained independence as a republic in 1978.
Its name is pronounced with emphasis on the third syllable, related to its French name of Dominique. Dominica has been nicknamed the “Nature Isle of the Caribbean” for its natural environment. 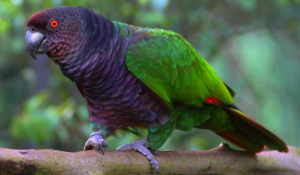 The island has lush mountainous rainforests, and it is the home of many rare plants, animals, and bird species. There are xeric areas in some of the western coastal regions, but heavy rainfall occurs inland. The Sisserou parrot, also known as the imperial amazon and found only on Dominica, is the island’s national bird and featured on the national flag, which is one of only two national flags containing the colour purple (the other being Nicaragua).

There has been a problem with your Instagram Feed.
Error: No posts found.
Go to Top