February 4, 2020. Time to move on again. Time is running fast. We have to be in St. Martin in about 2 weeks. And still, we have Antiqua and Barbuda to go to. We left Dominica with perfect sailing conditions! Sailing 9 knots with hardly any waves. Just right. With about 25 NM to go an easy ride! 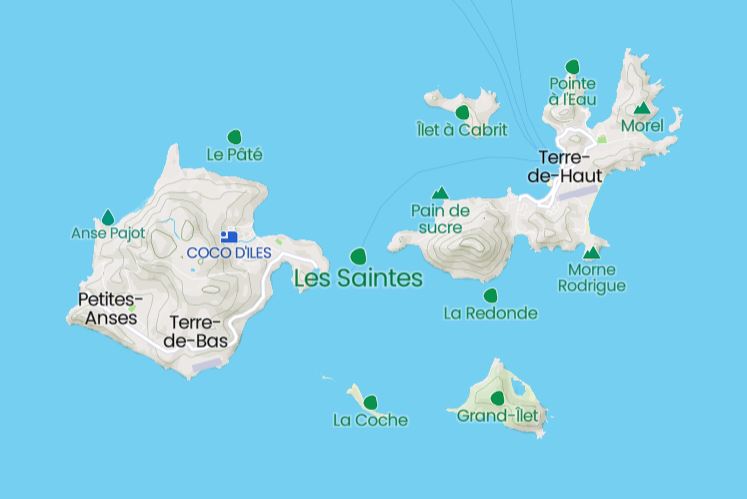 Les Saintes is a group of small islands in the archipelago of Guadeloupe. When coming from Dominica you sail between the islands of La Coche and Grand-Ilet. You then can already see the beauty of these islands. The crystal blue water and beaches are beautiful! We wanted to be not too far away from the centre of Bourg de Saintes at Terre-de-Haut. But at the time we arrived all the mooring balls were occupied. We anchored a bit backwards from the mooring buoys. Not too comfortable but the next morning we would try again to get a mooring. It is free to anchor, however, you must do so outside of the clear yellow markers in deeper water further from shore.

It is advisable to arrive as early in the day as possible as most moorings are occupied by midday. Moorings are white with a large metal ring on top, making pick up easy but the ring can cause problems if the wind drops by banging against your hull. Moorings have been installed in several anchorages: in the harbour at Bourg des Saintes, at Terre D’en Haut,  at the anchorage to the southwest of Ilet a Cabrit and at Pain de Sucre. We paid 11 euro per day for our 47-foot catamaran which I find very reasonable! There is a good dinghy dock to go into town. To get rid of your garbage go left at the dinghy dock and keep walking up the hill. Terre-de-Haute is a very small and picturesque place. The ambience is very relaxed. We rented a golf cart for the day and to be honest you can easily rent it for half-day only. We had more than enough time and even delivered the cart back earlier than we had to. But it’s the best way to enjoy the island and go around!

We first went to see Fort Napoleon. Located 114 meters above sea level. About a quarter of an hour’s walk from the dock, of the Vauban style Fort Napoleon, overlooking the Bay of Les Saintes. Up the stairs, a museum was set up; it is dedicated to the understanding of the Fort history and of the natural environment of the island. With the support of the Exotic Garden of Monaco, a conservatory of cactus was created. There are endemic species like the ” cactus candles ” or ” English heads” but also varieties from around the world. You can also observe iguanas there.

The fort was originally named Fort Louis. It was destroyed by British forces in 1809. It was rebuilt in 1867, and named after Napoleon III, but never saw use in battle, and was instead used as a penitentiary. It has now been turned into a museum dedicated to the Saintes’ history, culture, and environment. It also has contains the Jardin exotique du Fort Napoléon, a botanical garden dedicated to local succulent plants and iguanas.
Additionally, there is a myth that the fort is haunted by the spirit of a young French girl who fell in love with a British officer. Her lover promised to return for her when his duty was up, however after waiting for several years the young woman lost hope. She believed the officer had found another and in desperation, she threw herself off the cliffs of Les Saintes and into the ocean. The young man did return for his love and after finding out she ended her life believing he had betrayed her, he too threw himself from the cliffs. Inside the museum, there is a display that details the young lover’s story. This was more than 100 years ago. But it’s said that the spirits of the lovers continue to haunt the old Fort till today. Joined together in death, their love still blossoms in an island that as romantic as any in the West Indies.

Boatbuilding history
Alain Foy Jr. learned how to build boats from his father. Locally, he is something of an environmentalist: In the tradition of his forefathers, and in an effort to protect the waters around Terre-de-Haut, he uses all-natural materials. Boats built of these ancestral methods and materials. His father, Alain Sr., has a passion for Santos boats and is still quite a skilled sailor, one who knows the islands around Guadeloupe like the back of his hand.  His boats were fast and powerful and have often been seen “slicing the sea of the sometimes difficult Chenals Passage between Guadeloupe’s southern islands.” Although he is now retired, Alain Sr. is his son’s number one fan in the crafting of Santoise boats for the twenty-first century – giving him tips from time to time on his new projects.  These amazing boats, built by the senior Foy, still continue to be a source of inspiration for his son as well as other shipwrights. In the early 1800s, the first mayor of Terre-de-Haut was named Foy. For centuries, fishing boats made on Terre-de-Haut, known locally as Saintoises, were fashioned in the Breton style — made completely of wood, with round, U-shaped hulls able to carry a lot of cargo for their size. Foy’s father, Alain Foy Sr., learned the boat-building craft when he was a teenager, sourcing wood from the local calabash and catalpa trees to be used in their construction. By the 1970s, Foy Sr. started equipping his Saintoises with outboard motors and developed a new, V-shaped hull to increase speed.

Les Saintes
The Îles des Saintes (“Islands of the Saints”), also known as Les Saintes is a group of small islands in the archipelago of Guadeloupe, an overseas department of France. It is composed of two very mountainous inhabited islands, Terre-de-Haut Island and Terre-de-Bas Island. Grand-Îlet is an uninhabited protected area. There are six other uninhabited îslets:

Les Roches Percées
An uninhabited island characterized by high rocks abrupt which the erosion dug impressive fractures by which the sea rushes. These faults are at the origin of the naming of the island. It is a natural site classified by French law. The entry and the anchorage of motorboats, as well as sailing boats, are strictly forbidden.

Îlet à Cabrit
At 0.62 mi at the northwest of Terre-de-Haut Island, closing partially the Bay of Les Saintes. It is approximately 0.75 mi from east to west and 0.47 mi from north to south. Its highest mount up to 90 m (300 ft) is Morne Joséphine. It creates two passages into the Bay of Les Saintes, la Baleine passage to the East and Pain de Sucre passage in the South.

La Redonde
An uninhabited rock at 150 m (0.093 mi) South of Terre-de-Haut Island. It is the northern extremity of Grand-Îlet Passage. It is very difficult to berth on it, the swell there is constantly bad.

La Coche
At 750 m (0.47 mi) west of Grand-Îlet from which it is separated from it by the Passe des Dames, and on the east of Les Augustins by the Passe des Souffleurs. It is about 150 m (0.093 mi) in wide and 800 m (0.50 mi) long. It spreads out in the length from the southeast headland to the northwest headland and is characterized by a coast of abrupt cliffs towards Dominica Passage and a sandy hillside opening on Terre-de-Haut Island.

Les Augustins
A small group of rocks near la Coche from which they are separated by the Passe des Souffleurs. They are separated from Terre-de-Bas Island by the Southwest Passage, a major shipping lane. The Rocher de la Vierge is named for the Immaculate Conception.

Le Pâté
An island in the shape of a high plateau at 900 m (0.56 mi) of the northern headland of Terre-de-Bas Island, called Pointe à Vache. It opens the Pain de Sucre Passage, the main shipping lane to access to the Bay of Les Saintes by the North.

Les Saintes is a true gem. What an amazing atmosphere! The town is absolutely picturesque with the beautiful small but colourful houses. We loved this group of island. Need to go back. We did not see enough …