Today we are going to explore Porto. One advise to start with: PUT ON YOUR WALKING SHOES! Porto is very hilly! To give you an idea: the height difference between the Douro River, which is the lowest point, and the city centre, which is not even the highest point!, is 91 meters!  The streets are made of small cobblestones so take care and take your time walking around! Start at the top and try to end at the Douro River.  And take a cab back again haha! A pair of good shoes is essential to see this city!
We took the bus from Leixões to Porto. We like to travel with public transport because than you see other parts of a city instead of only the centre or the iconic must see places  .. it takes about half an hour to get to the centre. We did not have a plan. But apparently water always attracts!  When you leave the bus station you are right in the centre. We just walked through the city with all the beautiful streets with the typical Portuguese buildings most of the time decorated with colorful Portuguese tiles. Public squares all around. Lots of creative people showing their art in the streets. Little cafe’s everywhere. Just a very nice vibe! No idea where we were going but guess what: we ended up at the Douro River! Of course … water! This area is so nice. Especially close to the Dom Luis 1 Bridge. Cafe’s and restaurants along the river looking to the other side. Have a lunch there and just enjoy the hustle and bustle!

We continued our stroll to the West, along the Douro river, in the direction of the Yacht Club. We did not see a lot of people sailing on the river. Only commercial boats going up and down but not any yacht. You can sail up the river a long way but you need to take down the mast. Worth it but lots of work! The Yacht Club is quite a long way from town and also on the other side of the River. So after 2 hours of walking we sat down and had a sort of traditional lunch with Bacalhau and chips. After lunch we did not go to the Yacht Club, too far away and we walked back. 91 meters …… UP ….. let me tell you, quite a walk! Back to the bus station to go back to Leixões. Also the outskirts of Porto are busy. As in every town there are many different type of residents. Walking back to the boat we bought some more of those lovely sweets.  We would be leaving early morning continuing in the direction of Fiqueira da Fos. About 60? miles to sail.

PORTO
Porto is situated on the North bank of the Douro River, called Ribeira, whilst Vila Nova de Gaia is on the south bank. The river finds its way through deep valleys flanked by steep escarpments on either side. On the North side there are abundant hills, which boast the city’s architectural wealth, whilst the South bank leads to the plateau overlooking the Port Wine Lodges. This side of the River is good to visit a wine/port cellar! The Douro River is an integrated part of the city’s scenery with narrow cobbled streets and past merchants’ houses and cafes. As the local saying goes: “Coimbra sings; Braga prays; Lisbon shows off; and Porto works.” The city has been declared a UNESCO World Heritage Classified Area.

The 6 ionic bridges of Porto

The Most Famous: Luis I Bridge. Built in 1886 by a disciple of famous Gustave Eiffel. As the other bridges, it connects the city to Vila Nova de Gaia. It has two levels which were originally destined for road traffic. However, today, the lower level is used by pedestrians and cars, while the upper level is used by the Metro do Porto. Pedestrians may also admire the beautiful sights of the Vila Nova de Gaia port, with its famous wineries.

The Oldest: Maria Pia Bridge. The oldest bridge in Porto, also known as Dona Maria. This is a railway bridge which was lifted in 1877 by the builder of the Eiffel Tower himself and was named after the queen of Portugal of the time. Today, it represents a monument.

The Controversial: Arrabida Bridge. Designed by Edgar Cardoso (1913-2000), the best bridge engineer of Portugal. Opened in 1963 as the concrete bridge with the longest arch in the world. Even though it lost the title, 270 meters long arch is still impressive enough. Arrabida is a road bridge but offers amazingly beautiful river sights, being positioned near the coast.

The Newest: Infante D. Henrique Bridge. The Infante Bridge is the most recent addition to Porto’s bridges, and it is amazing because of its simplicity. The purity of its forms and the beauty of its elegant, thin shape leave travellers jaw-dropped. At its 280 meters arch span, and 371 meters in length, the Infante Bridge stands out in every possible way. This is even more so since it is beautifully lightened both on the parapets and under the arch.

The Futuristic: São João Bridge. The Maria Pia Bridge was replaced by the futuristic São João, also built by Edgar Cardoso, between 1984 and 1991. It is located close to Maria Pia and spans 250 meters of the Duoro Bridge. Although it is beautiful looking and futuristic, this railway bridge does not represent such a popular attraction as the ones before it.

The Remote: Freixo Bridge. Maybe the least known and also, the least popular of them all is Freixo. The double road bridge is located on the eastern side of the city. It was finished in 1995, thus making it the second youngest bridge in Porto. It has 8 spans and measures 705 meters in length and 30 meters in height. 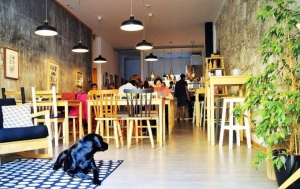 If you want to see and experience something else than the churches, old buildings or the popular ionic must see things click this link. Here you find some really nice tips! Visiting these places gives you an idea of ‘day in the life of a local in Porto’. I love it. Especially the Mesa325 café. A café right under your own house. This way they are close to family and it makes life so much easier. Like your in the living room of a local! Great idea. Look at the link below!