After having a few days of rest in Baiona we are on the move again. And today we will be entering Portugal! Our trip till now is going very smooth! Beautiful sunny weather and winds are light, sometimes even too light. But ok, this is better than having to sail in 25 knots every day. It’s a beautiful sunny day and it feels like a new adventure is looking around the corner. Portugal! Read a lot about this country and the general impression is giving us good vibes!  We left Baiona at 08.02  exactly in the direction of Leixões. Beautiful sunrise, sun is shining but no wind …..

We entered Portugal at 10.36 hrs. Changed the Spanish courtesy flag for the Portuguese and were officially checked in! Portugal here we come! We felt sort of proud coming this far with the 2 of us. And biggest bonus is that we are accompanied by dolphins dancing around the bow! What a journey Eight is taking us on. We enjoyed every minute!

Continuing our sail to Leixões. The sun was shining and the views spectacular. We had a super relax sail to Leixões. Trying to catch some fish and just enjoying our sail. What you do have along the coast is that the wind sometimes picks up just like that. From 3 knots to 18 in just a few minutes. So always keep an eye on the wind! Also again the colour of the coastline always looks a bit bluish. We choose to go to Leixões instead of Porto. We arrived in the harbour around 19.00. To go to Porto would be another hour and we had been sailing for 11 hours already. Enough is enough. Leixões is a big Port on the Atlantic side of Portugal. In the Port you find a nice protected marina with a lot of sailing activity.  The Port and Marina are called Leixões.  The name of the town is Matosinhos and is part of the town of Porto. In this town there are a  few things which are nice to see and do. The Boa Nova Tea House, the Leca Lighthouse, the tidal/infinity pool at the beach are worth paying a visit. The town of Matosinhos looks a bit like past glory. Walking around we came across a local bakery with the typical Portuguese sweets which we had to buy! Not having these for a long time! Very cheap! We paid 2,70 for about 8 sweets. The Marina of Leixões is about 10 kilometres from the Porto city centre and  the Douro River. When you walk about 20 minutes along the port on your right hand side  you see a bridge which goes over the water. Take this bridge to the other side of the water and on your right you will find the buses to Porto. I think we paid 2 euro and it took about 20 minutes to the centre of town. So very easy to take public transport. But put your walking shoes on when you visit Porto ……

The Portuguese coast is extensive; in addition to approximately 943 kilometres (586 mi) along the coast of continental Portugal, the archipelagos of the Azores (667 km) and Madeira (250 km) are primarily surrounded by rough cliff coastlines. Most of these landscapes alternate between rough cliffs and fine sand beaches; the region of the Algarve is recognized for its sandy beaches popular with tourists, while at the same time its steep coastlines around Cape St. Vincent is well known for steep and foreboding cliffs. What I remember from our sail along the west coast is seeing beaches and rough cliffs. When I can believe Wikipedia the amount of beaches in Portugal is more than 100!! 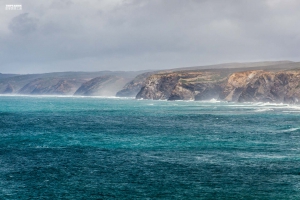 Portugal has a wide variety of landforms, climatic conditions, and soils. The major difference is between the mountainous regions of the north and, across the Rio Tejo, the great rolling plains of the south. Within these two major regions are further subdivisions that reflect the country’s vast differences. Geography and topography are also reflected in the climate. The mountainous regions of the north are considerably colder than the south. Winter snows in the Serra da Estrêla (which contains Portugal’s highest peak at 1,986 meters) and the Serra do Gerês near the northern Spanish border may block roads for a time. The weather along the northern coasts and in the center of the country is milder; Lisbon has an average high temperature of 14°C in January and 27°C in August. Southern Portugal is warmer. The ocean moderates coastal temperatures, but the interior of the Alentejo can be quite warm, with temperatures sometimes above 40°C during the summer months. Because of its Mediterranean climate, most of Portugal’s rainfall occurs in the winter, the north receiving much more rain than the south. Portugal is world-famous in the surfing community, the coast hosts one leg of the World Surf League Tour. Much to satisfy even the most experienced watersports lovers. Lots of golf courses in Portugal, which run alongside the impressive rugged coast. Walking, biking. And superb food. Much variety in fish, meat, vegetables and herbs. The most popular dish is Cozido a Portuguese. Meet the king of all stews!  Portuguese stew is the perfect example of the importance of using all the meat an animal can provide. This meaty bomb includes beef, pork, chicken and a variety of pork derivatives such as blood sausages and smoked pork parts. There are also some vegetables thrown in the mix, but one must admit this is a dish for meat lovers. For me personally there are too many unknown pieces of meat so I would never order a dish like this! This is just the beginning of Portugal. Very curious to see what more this country will bring us!