The Tobago Cays are an archipelago located in the Southern Grenadines of Saint Vincent and the Grenadines comprising five small islands and extensive coral reefs. The cays – Petit Rameau, Petit Bateau, Baradal, Petit Tabac and Jamesby – are a popular tourism destination. The Tobago Cays are part of the Tobago Cays Marine Park run and owned by Saint Vincent and the Grenadines government. The marine park consists of a 1,400-acre (5.7 km2) sand-bottom lagoon which encompasses the five cays, the inhabited island of Mayreau and the 4 km Horseshoe Reef.
Have a look at this outstanding drone video of the Cays. Really amazing! Made by Damien360. He also makes videos of catamarans! Like the Saona47! Great work, have a look at his youtube channel!

The 5 islands of Tobago Cays

Petit Rameau. The island has a small sandy beach to the eastern shore facing Baradal island and a couple of tiny sandy areas on the southern side facing the narrow channel which separates it from Petit Bateau. The centre of the island is covered in trees and low growing foliage. Small yachts are currently permitted to anchor within the TCMP management zone in the channel to the south and to the east of the island. Yachts should anchor only on the sand-bottom areas.

Petit Bateau is the largest of Tobago Cays islets. It is also known as Middle island (Middle Cay) or as BBQ island. Please note that Google Maps di a mistake when marked it as Petit Rameau. While the real Petit Rameau Island is located a little to the north. You’ll get two excellent beaches, hiking trails, as well as several cafes with lobsters (Free Willy, Romeo, Alphonso’s and others). Good lunch and dinner are about US$40 per person. 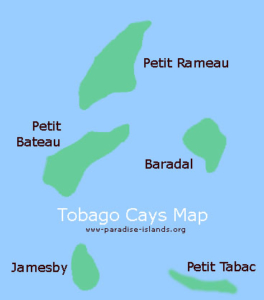 Baradal is an island with that iconic sand spit in the archipelago. There is also a second beach, but it’s not so good. The key feature of this island it’s the closest one to the reef. You can even swim there. Just remember, that during the tides a strong current may bring you into the open ocean.
Petit Tabac is the main pirate island. It is also known as Jack Sparrow Island because a notable episode of Pirates of the Caribbean (2003) was filmed here. The island has many palm trees, white sand and is great for snorkelling on the reef. Entry into the water is mostly rocky, but there are also few sandy areas with perfectly clear water on the shallows. It is better to get here on a sunny day without wind.
Jamesby is the smallest island in the group. It has a beach with palms, but not very comfortable, as this is the Atlantic coast. The snorkelling is not great due to the strong currents.

We sailed from Union island to the cays. We entered between Petit Bateau and Baradal. Turtle island would be our anchorage. Already from far away, we could only see masts all around. Very very very busy …. and indeed when you sail between the islands it’s crowded! There are a few mooring balls but we always like to anchor. I must say the water is crystal blue! Beautiful! But the amount of boats and people makes it totally unattractive for me. And, we probably have not been lucky but hardly any turtles or any other wildlife here ….. there are things to do like:

Horse Shoe Reef: A coral Reef site with  fish and coral (inshore side snorkelers; ocean side SCUBA)
Baradal Turtle Sanctuary: Protected area where green and hawksbill turtles can be observed foraging freely (Snorkel)
Petit Tabac: Isolated beach perfect for a private picnic and the location where the desert island scene in “Pirates of the Caribbean: Curse of the Black Pearl” was filmed.
Petit Bateau, James Bay, Petit Rameau: hiking trails where you could observe tropical flora and fauna including iguanas and birds. They also provide excellent panoramic views of the Grenadines.

The Tobago Cays are known as the “Jewel in the Crown” of the Southern Grenadines and are of significant economic, cultural, social, and environmental value to St. Vincent and the Grenadines. But for us, we feel it is very overrated. For experienced snorkelers and suva divers, there is nothing to see. We only saw maybe 2 turtles, that’s it.
When I would go again I would definitely not go in high season with boats and people all around!