Previous Next
CANOUAN – THE GRENADINES

Canouan – “island of turtles”
Only maybe 20 NM south from Mustique. We were expecting a lot of wind for at least a few days. We wanted a safe anchorage to protect us well. So we ended up in Charlestown Bay.  This is the main anchorage on the west coast of the Island, lying open to the NW. Visiting yachts can anchor anywhere, except close to the Tamarind Beach Hotel which is full of moorings. Holding is good in sand, but the strong gusts coming off the hills made the boat swing quite a bit. But it was ok for us to handle.

There are mooring buoys of which the ones close to the shore/hotel belong to the charter fleet and are not available to visiting yachts. Other moorings in the bay belong to Marcus and John, both provide a number of services to visiting yachts. These are really very friendly people. Even when you do not take one of their buoys they come and check on you every day! Also, boats will call to sell you fish, lobster, bread, water, ice, and diesel. If buying diesel be sure to filter it well – it is unlikely to be clean. At the time we were there the hotel was under construction. So the jetty at the hotel could not be used. We had to go to the jetty where the ferries arrive. There is no ladder, no cleats to tie your boat, very high and with a swell running, it is quite tricky to land on the dinghy dock safely. I would say even not possible for elderly people … If landing on the beach, be aware that huge waves can appear from nowhere and somersault the boat. It all looks very poor and it did not appeal to us at all … But we went ashore and returned to the boat very quickly. When walking into the town we saw only drunk people, people smoking marihuana, bad roads, some very small local supermarkets. We think the only possibility for WIFI is at the police station. A few people were standing there … we went to town only once. We just felt uncomfortable. No restaurants, hard to get on land, no good food to find …. for us, not a destination to go back again …
Canouan is called the new multi-million dollar island of the Caribbean but I just do not see it. They extended the runway of the airport and built a mega-yacht marina. Very easy for the rich and famous to step out of their plane into their mega yacht. A casino, a Raffles-branded resort, and a Jim Fazio-designed 18-hole golf course, all appeared on the island in the early 2000s, but a lack of infrastructure on the island set each one up to fail. The casino has since been repurposed as a hurricane shelter, the Raffles resort was bulldozed, and while the golf course has survived, it is largely bereft of players.
The only positive thing in Canouan we learned is how to handle a lobster! The lobster passed by and we bought quite a huge lobster but under the consiti9on that he would show us how to kill it … well, that was not to difficult. I cooked it for 20 minutes and left it to rest. Around 19.00 it was plancha time. Oil, garlic and the is beautiful lobster on top. Oh, man! Yammie! Due to the wind, we stayed for 3 days nights.

Our next plan was to go South and to sail to Grenada. So off we went. When we came along Union Island I suddenly realized that we never checked out? … Oops … in a split second we had to changed our plan and we went port! Up to Union Island! Clifton Bay is where you check in and out. Not really a nice trip as we had to motor all ther way beating up the current and waves. Arriving in Clifton Bay you have to be careful with the reefs right in the middle of the bay. It was very busy. Many many boats. When arriving in the sunlight you can see the reefs clearly but at night I think you have to be very carefull. There are mooring balls or one can anchor, which we did. The next 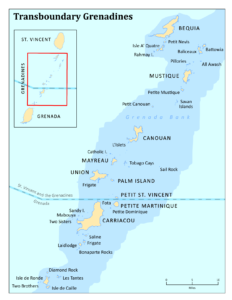 St Vincent and the Grenadines is a multi-island country. The Grenadines are a chain of small islands that lie on a line between the larger islands of Saint Vincent and Grenada. Part of the  Windward Islands in the Lesser Antilles.
In the Northern part, you’ll find the islands of Bequia and Mustique. The Southern Grenadines consist of Canouan, Mayreau and Union Island. There are 10 uninhabited islands are Palm Island, Petit Saint Vincent, Tobago Cays, Isle à Quatre, Baliceaux, Bettowia, Petit Mustique, Petit Nevis, Petit Canouan. and Savan.  The Grenadines is known for the haunts of the rich and famous – yachting, diving and fine beaches. Many rich and famous have a house somewhere around in one of the islands!