The distance from St. George Grenada, to Carriacou is about 23 NM. A very easy sail along the beautiful West coast of Grenada into Tyrell Bay, Carriacou. A very very busy bay but we managed to find a secure spot between all the other boats. In the 17th century, Carriacou was spelt ‘Kayryouacou’ by the Caribs who translates this to “The land of Reefs”. These ancient Amerindians were the first settlers believed to have inhabited the island. In more recent times, like the 18th century, the island has been the home to traditional boatbuilders who hailed from Scotland and started a thriving trade of building sailing vessels from locally harvested wood. 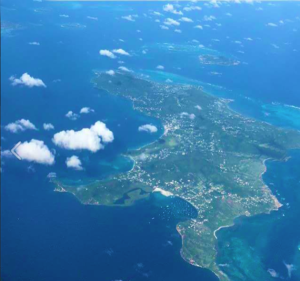 Carriacou is the largest island in the Grenada Grenadines. It is also the largest island in the Grenadine Islands (Vincentian and Grenadian Grenadines). It is located at latitude 12° 28′ N, longitude 61° 27’W. Carriacou is home to 8,000 people. The capital city is Hillsborough, the only town or city on the island. The port authority is in Tyrell Bay which is also where the ferry from Grenada docks. In the main street of Tyrell Bay, you find various bars and restaurants. The mangroves, in the northern part of the bay, is a protected area and is used by yachts to shelter from hurricanes. Tyrell bay also has a marina and boatyard where several services are being offered. Also, a petrol station is available. A big supermarket along the main street is convenient for all kind of provisioning. Most of the other island settlements are very small villages.
And just so you know …. there are more than 100 rum shops in Carriacou …
There was no need to clear in as we came from Grenada.  Time enough to go and have a sundowner right in front at the main road in one of the small bars.


Next day it was time to explore the island. We went walking to Paradise beach to have lunch at the famous Off the Hook beach restaurant. Along the way, you see a lot of typical Caribbean houses and the higher you get the better the views. Off the hook is a bar and grill on the waterside. Grilled lobster, chicken, fish, fries, pizza and cold drinks. Great place to chill and read in one of the colorful deck chairs on the beach. Open daily for lunch and dinner. Bonfire parties with live music. Cold drinks, beer and hard liquor available. Great place!  There are several bars and places here. We walked back via the main street and decided to take the bus back.

Boatbuilding tradition
From Carriacou’s main town of Hillsborough, buses wind their way up and over hills to a tiny hamlet named Windward. Depending on the collection and delivery of people and lunches, it takes anywhere from ten minutes to half an hour. As the bus makes the final descent it is revealing a panorama of islands and reefs. When we arrived at the place where the boatbuilding was supposed to be there was … not much.

There are a cafeteria and a small supermarket.  There was 1 boat almost ready and that was it. No people around, no work to do. No other boats being built. There wasn’t even a proper boatyard left. Apparently there are some other yards but in our opinion, you can not speak of boatbuilding around here! If you like to know more bout the boatbuilding look at award-winning film ‘ Vanishing Sail’ by Indian Creek Films. A documentary on this age-old Caribbean tradition – well worth watching. This is the trailer of that film.

Sandy Island
Sandy Island is located off the west coast of Carriacou. The distance between Sandy Island and Carriacou is less than a kilometre and the views in both directions are spectacular. Sandy Island is basically a narrow white sandbar that is about 150 metres long with a little vegetation. The gorgeous white sand beach is located on the southern side of Sandy Island. The northern shore has almost a wall-like structure of washed-up coral that looks manmade. This was actually formed as a result of hurricane damage a few years ago. The same hurricane also created a couple of pools of water, almost like wading pools, close to the northern shore. Some coral reefs are located on the north and west ends of the island. A good place for snorkelling when it’s not to rough. Anchoring at Sandy Island is strictly forbidden. There are mooring buoys just offshore. Mooring that day was quite rough. Park rangers collect a $25 EC (US$10.00) per day fee for a mooring ball.